Much has happened in the last six months. Extensive fires in the Mt Lofty region, on Kangaroo Island and in the South-east of South Australia, as well as fires in other mainland states. These rocked the nation over the Xmas and New Year period. A global pandemic followed on the heels of the fires, wreaking havoc with lives, lifestyles and the economy.

Many people donated and raised funds to support the fire-ravaged Australian communities, including funds to help care for wildlife that had been displaced or burnt by the fires. The ferocity of the fires led to renewed calls to address climate change. But just as the momentum for this was building, attention switched to managing Covid-19, and the ravages of the fires were all but forgotten.

The fires on Kangaroo Island (KI) attracted global media attention from London to New York because the western half of the island, where most of the native vegetation remains, was almost totally burnt. Concerns for threatened fauna, like the Glossy Black Cockatoo and KI Dunnart were high, as at least 50% of their habitats were affected by fire. The real challenge for these and other species, however, comes in the first few years post-fire while the habitats recover. Some species like the cockatoos will likely survive the fires but then will need to search for suitable habitat elsewhere on the island. If they cannot find vacant areas of suitable habitat then many of these will perish too.

The Australian flora is adapted to fire and will bounce back after normal fires, or so we hope. However, the recent fires were more intense and hotter than previous fires. Given this the post fire recovery may be slower and incomplete. Some plant species may disappear altogether. Sadly the distributions and abundances of the plants and the animals that existed prior to these fires were not known, so we have no way of judging how different species have fared and whether all have recovered. This is a common problem for Australia. Good baselines for flora and fauna are lacking for much of the country and Kangaroo Island is no different. This is despite the Island’s status as a wildlife haven and international tourist destination. We invest in the infrastructure to support tourism, but we invest a pittance in understanding the biota – the very assets that bring the tourists. This needs to change. Perhaps a portion of the immense sums we spend on infrastructure should be allocated to improving the natural infrastructure.

The lasting memory for me of the Covid-19 shutdowns will be the deserted streets and buildings that make up much of our communal built infrastructure. In comparison, walking paths were crowded with more people enjoying the outdoors, the natural infrastructure. There is a message here – our natural systems are more important in these times for our wellbeing. My fear, however, is that we will quickly return to our busy lives and our built infrastructure and lose our connections to nature once again. And, our governments will spend even less of the public purse on nature, let alone on climate change – the one thing that is truly an existential threat.

The plight of the Kangaroo Island Glossy Black-Cockatoos is a cause close to Bio-R’s roots. Our first project was revegetating 170 hectares of farmland at Cygnet Park near Kingscote, where we hosted our first community planting festival. These plantings established populations of threatened plant species and large stands of Drooping Sheoak (Allocasuarina verticillata), a vital food source for Glossies.

Every year since, we have monitored what birds are using the property. As the planted sheoaks have matured and set seed, Glossies have been regularly recorded feeding in them, and they breed nearby too.

The same could not be said, however, for the rest of Kangaroo Island. Most of the island to the west was impacted by a fire of an unprecedented scale and severity. Over half the island burned – about 210,000 hectares.

For the Glossies, over 50% of their feeding habitat was impacted. Moreover many nest trees were destroyed in the fires, with an estimated reduction in natural hollows and artificial nest boxes of nearly 40%.

Before the fires, the Glossy population was about 370 birds divided into seven major flocks, with six having feeding habitat burnt in the recent fires. The flocks with the least live feeding habitat left are the Middle River, Western River and Southern flocks. The DeMole flock experienced a significant reduction in carrying capacity, while the Eastern, Stokes Bay and Wisanger flocks are less affected.

Up until April, early indications after the fires were that Glossies were not moving in numbers from west to east; however, our experience at Cygnet Park in mid-May was that there were additional cockatoos using the property. We often have about 16 or so Glossies using the property of 300 ha, with these birds feeding on sheoak cones in the revegetation. However, in mid-May, there was also an additional flock of about 20 birds using Cygnet Park – these birds were calling a lot and seemed unsettled, sometimes coming into the revegetation to feed on sheoak cones, but on a couple of days, by mid-morning, the whole flock took off to the north or the west. So, we believe that some birds from the west of the Island were seeking refuge at Cygnet Park for some of the day for feeding and roosting.

Seeing these cockies using Cygnet Park, as well as recording one nesting pair, is certain proof that we are achieving BioR’s long-term mission of reconstructing habitat for wildlife at a scale that can assist in halting biodiversity loss.

Glossies have attempted to breed in areas which were substantially burnt in the fires, including the Middle River and DeMole River. By late May, 23 nestlings had been produced in the 2020 breeding season. This is an encouraging sign, but the limiting stage may come once the chicks fledge and both parents and young need to find sufficient food in the months ahead.

After the fires in January 2020, Bio-R launched an appeal to raise funds for the Glossy Blacks on Kangaroo Island. Through the generosity of many donors, a substantial amount was raised and some of this money has been spent on growing and planting out sheoaks on a number of properties across the Island. In total the Recovery Team will be planting out 7,150 sheoaks on 26 private properties and Bio-R has contributed 1,150 of these tubestock plants. Fifty of these were planted into an area of burnt revegetation on Cygnet Park, with generous spacing to ensure they grow into large trees and are attractive for the Glossies to feed on.

In addition, the Paton family has funded the planting and guarding of 60 mature sheoaks on Cygnet Park; by serendipity we accessed 60 x 5-year old plants in rocket pots, some of which were already bearing cones. These were planted in May and, after watering all 60 plants over their first two summers to ensure survival, we will continue to water half for the rest of their lives to ascertain if cone production can be enhanced by additional water in the drier months.

Additional resources from our Glossies Recovery Fund will be used to grow and plant out additional sheoaks in the years to come and for other activities as directed by the Recovery Team on the Island.

We would like to thank everyone who donated to the Fund and also to the willing helpers who gave up time to plant sheoaks on Cygnet Park – the Klein family and staff of Exceptional Kangaroo Island. All were delighted by the sight of Glossy Black Cockatoos wheeling in the skies above them (and displaying those amazing red tail feathers!) and feeding on nearby revegetation – a sure sign that their endeavours will bear fruit in a few years.

For updates on the Glossies and their recovery, this link will enable you to subscribe to the Recovery Team’s ‘Chewings’ newsletter: https://www.naturalresources.sa.gov.au/kangarooisland/plants-and-animals/native-animals/glossy-black-cockatoo-recovery.

If you are reading this, there is a good chance that you were one of the 260 people who helped BioR put in 5,300 plants of 62 species at Frahns Farm inside the new kangaroo proof enclosure on 23rd June 2019. We had a magnificent day for planting and were overwhelmed by the support, camaraderie and wonderful sense of community engendered by the event.

But the growing and planting are only the beginning of the journey towards success in restoration. Previous years plantings showed us that watering of tubestock in the hotter drier months is essential at Frahns, where conditions over summer are difficult for newly planted tubestock. So, thanks to John Morley and his helpers, a system of black poly piping was installed along the scalped rows, which allowed us to access water from the SA Water pipeline via hoses that plugged in at intervals along the rows.

Beginning in October, an intrepid band of waterers spent one or two days per month watering our precious plants, assisted by excellent rains at the end of January and start of February and through April. We also watered the many rows of native grasses which had germinated well in the spring (Photo 1 – direct seeded grasses in scalped rows). These direct seeded grasses flowered and set seed over spring and summer and hopefully will lead to many generations of native grasses over the site.

Although no actual counts of surviving plants were made, we estimated that about 85% of plants put in the ground in June survived through to March, by which time there was enough rainfall not to need to water again. There did not seem to be any pattern in terms of plant species that survived or otherwise, but the general feeling was that the plants at the top of the hill had fared worse than those lower down the slope. Also plants put in amongst the trees along the edges of the scalped plot, which had to deal with greater competition from native plants and weeds, had fared worse than those in the scalped rows (Photo 2 – general view of scalped row).  Regular watering as well as scalping of the topsoil to lessen weed competition has led to very healthy plants, some of which have flowered in their first year.

Thanks to all the people who came out and ensured the great survival of plants, and particularly to those who helped on multiple occasions – John, Loraine, Garry, Betty, Keith and Jan. We also acknowledge the Klein Family Foundation whose very generous donation made this project possible.

Illustrator and creative extraordinaire Jesses Mess will donate $500 to BioR when she sells 100 of her delightful Mallee Emu-wren pins.

Why not help her (and us!) reach that goal?

Simply follow the link to her Etsy store to sport one of these speccy pins and save our wildlife whilst you’re at it!

If you have questions, comments or want more information on current events and how you can get involved, email us at info@bior.org.au 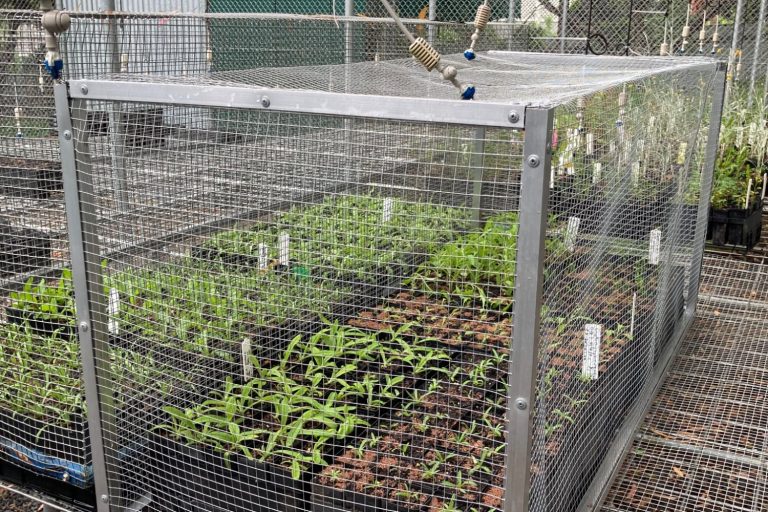 The trials of a nursery manager are not just about how to germinate and grow plants. Last growing season rats began eating seeds, particularly those of acacias and other peas, and plants of many species once the seeds had germinated.

Scientists say the River Murray flood has been “disastrous” for the region’s bird species, prompting urgent calls for better management and intervention of the river system. 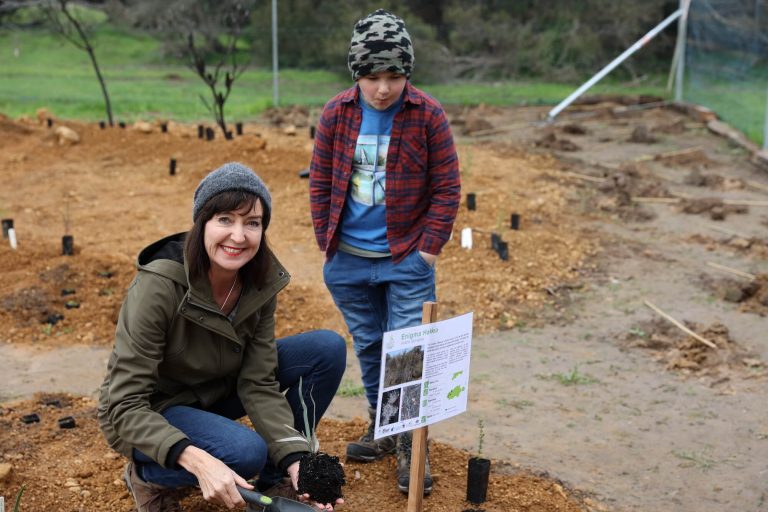